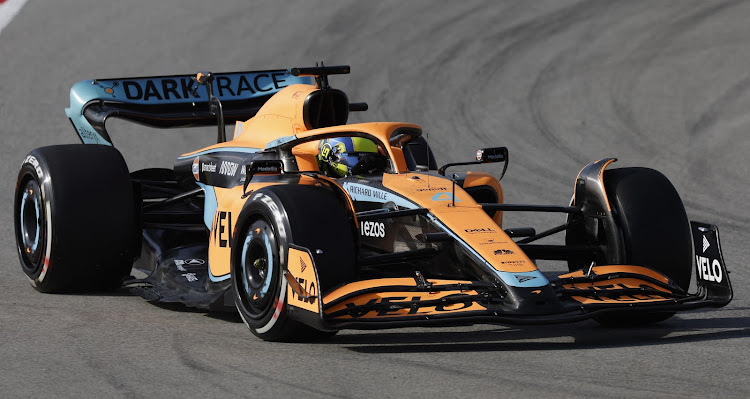 Briton Lando Norris set the pace for McLaren on the first day of pre-season Formula One running, as the 2022 cars designed under the biggest rules overhaul in decades hit the track to mark the start of a new era for the sport.

Norris, who had his new MCL36 all to himself, lapped the Spanish Circuit de Barcelona-Catalunya in one minute 19.568 seconds on Wednesday, outpacing Charles Leclerc and Carlos Sainz who shared driving duties for Ferrari.

Seven-times world champion Lewis Hamilton was fifth, behind new team mate George Russell, having taken over from the younger Briton after lunch.

Max Verstappen, carrying the number “1” on his Red Bull, was ninth on his first day as defending champion.

"We’re only in day one of the season and even if we’re amazing now, everything can change by the time we get to the first race."

Verstappen’s new RB18, seen in public for the first time after Red Bull presented their new livery on a show car at their launch, turned heads due to its novel side-pod design.

It also allowed the Dutchman to clock up the highest individual lap count at 147.

"We wanted to get laps in today to get used to the car and to get a general understanding about how it’s behaving," said the 24-year-old, who will hand over to team mate Sergio Perez on Thursday.

"Everything worked pretty well, so it was a good start and a positive day."

As a team, Ferrari covered the most distance, with Leclerc and Sainz chalking up a combined 153 laps. Eight of the 10 teams chalked up more than 100 laps.

Haas endured a difficult day as Russian Nikita Mazepin’s running was hampered by a cooling leak, while team mate Mick Schumacher’s time on track was limited by a damaged floor, meaning the pair completed only a combined 43 laps.

Alfa Romeo recorded the lowest mileage of the day with reserve driver Robert Kubica and former Mercedes driver Valtteri Bottas managing only 32 laps between them.

Lap times, which count for little in testing with teams and drivers running different programmes and fuel loads, were even less important on Wednesday as teams and drivers familiarised themselves with their radical new cars designed to improve the racing spectacle.

Teams will run their cars in Barcelona for another two days before flying to Bahrain for the official pre-season test from March 10-12.

The island kingdom is set to host the season-opening race on March 20.

As Mercedes launches new car, former champ says he was never going to stop racing
Life
6 days ago
Next Article