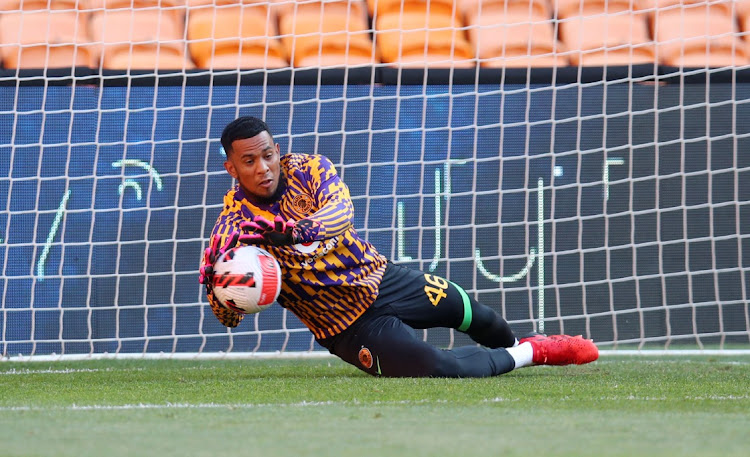 Brandon Petersen of Kaizer Chiefs during the match between Kaizer Chiefs and Royal AM on September 18 2021 at the FNB Stadium, Johannesburg. Picture: BACKPAGEPIX/MUZI NTOMBELA

Brandon Petersen believes in two things that many not long ago might have written off as pipe dreams: that he can make Kaizer Chiefs’ No 1  jersey his own‚ and the club’s Premier Soccer League (PSL) title race is not over yet.

Fifth-placed Amakhosi (29 points from 17 games) are a huge 19 points behind runaway leaders Mamelodi Sundowns (48 from 21) in the PSL‚ though with four games in hand. But two of those extra matches are ones they failed to honour amid an outbreak of Covid-19 and are at arbitration‚ so six points might not be available to play for.

Still‚ if Chiefs converted all four games in hand to maximum points, that would give them 12‚ leaving them on 41‚ seven behind Sundowns.

“There are still a lot of games to play and a lot of points at stake‚ so it’s never over until it’s over‚” Petersen said.

The more realistic target for the keeper would seem to be keeping his place between the posts. At 27‚ it has taken Petersen a long time to make a breakthrough at a top-flight club. And two starts in Chiefs’ games returning from the two-month domestic break also do not mean he has done that yet.

But after six seasons at First Division Cape Town Spurs‚ another sharing keeping duties at Bidvest Wits in 2019/2020‚ a full campaign stranded without a club after the Clever Boys were sold‚ and being in fourth place in Chiefs’ pecking order since his arrival in June‚ Petersen is determined to grab his chance now that he has been handed one.

Chiefs made a mediocre return from the two-month domestic break with a Nedbank Cup defeat against TS Galaxy and 0-0 league draw away against Cape Town City‚ but Petersen shone in those games.

“As a pro footballer you want to be part of the big teams. And I like to be in the mix with the best‚ because that makes me better‚” he said when asked why he joined Chiefs‚ knowing the level of competition he would face from fellow keepers Daniel Akpeyi‚ Itumeleng Khune and Bruce Bvuma.

“It’s always been to keep working on my craft and try to perfect my game. You only play the way you train. I’m doing the right things every day‚ working hard.

“Everyone’s been doing well at training — Daniel‚ ‘Itu’ and Bruce. Healthy competition is good for us‚ because you take one out and the other in and he does the same job,” Petersen said.

“You have your aspirations and as long as I’m on the field training in my craft I’m happy. Being given the No 1 jersey in the last two games is an honour for me.

“I think it’s important for a goalkeeper to always be ready because you never know what might happen‚ and eventually when my chance came I took it with both hands. Now the aim is to try to cement my spot.”

Chiefs will look for their first league win of 2022 against Baroka FC at Peter Mokaba Stadium on Saturday.

We must win every game to clinch title, says Klopp

We must win every game to clinch title, says Klopp